Extended Thought: How Could Someone Kill Death a.k.a the Grim Reaper?

Assuming that the Grim Reaper is real, which I don't believe he is but based on folktales and such...

What if Death dies?

If the Grim Reaper dies, does he become mortal? Or an angel? Or, what? Will he evaporate?

If Death dies, can WE die? Can we EVER die?

In Greek Mythology, or from wherever the Grim Reaper comes from, what would happen to all the stories if Death dies? If he DOES die, will he go to Heaven or Hell or just evaporate?

Let's talk about him, first. Who is the Grim Reaper? Who is Death? What it is he like?

Death, personified as the Grim Reaper, is usually shown as a skeleton wearing a black cloak with a hoodie and holding a scythe like he's about to strike you. 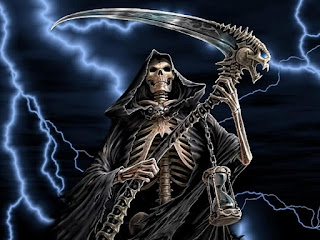 I didn't mean to frighten you if I did :P

I just looked through different Deaths in Wiki. Here is a not-so-quick overview kinda thing.

Middle Eastern Death
Mot:
A Canaanite God of Death
I couldn't find a good picture of him. Perhaps people wayyyyy back when were too terrified of him to make a statue. But I found plenty pics of his Dad, El. Presumably, father and son look somewhat alike...well, that's what I presume anyway :P 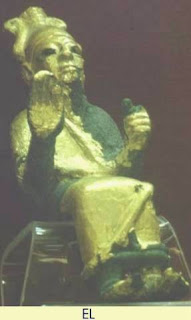 Oh, a little tidbit, Mot is Ugaritic which is an ancient "Northwest Semitic language, discovered by French archaeologists in 1929. It is known almost only in the form of writings found in the ruined city of Ugarit (modern Ras Shamra), Syria."


Next, Greek Death.
Apparently, the Greek Death was a bit of a nice kinda guy. He wasn't all mean and evil and he had wings and a beard...which for some reason is really emphasized. HE HAS WINGS AND A BEARD!

Thanks Wiki ol'buddy for the pic. 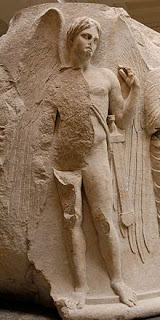 His name was Thanatos but apparently he was called Death as well. Maybe it was like a nickname. He's the guy that takes our souls to the river Styx and hands us over to the guy who takes us across Styx into the Underworld.

Poor Thanatos didn't have much of a roll in Greek Mythology, it turns out. Poor winged-bearded guy.

Next up is,
Celtic Death
"the Ankou is the spirit of the last person that died within the community and appears as a tall, haggard figure with a wide hat and long white hair or a skeleton with a revolving head who sees everyone, everywhere. The Ankou drives a deathly wagon or cart with a creaking axle. The cart or wagon is piled high with corpses and a stop at a cabin means instant death for those inside."

Ireland has this creepy creature that is made up of many creatures. Plural emphasized effectively.

It is called the dullahan. You can read about what he? looks like here. It's kinda gross.

Here's a pic of him. 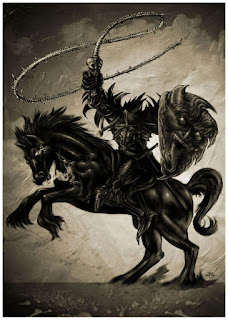 He holds his own head when he rides on his black stallion. Maybe it's because he doesn't have a neck? Or does he? Basically this is the-Headless-Horseman-Who-Found-His-Head-But-Forgot-What-He-Should-Do-With-It-Because-It's-Been-So-Long guy.


Polish Death
has a name I cannot pronounce. You try: Śmierć
Polish Death...er Smeark, I guess, does not like to wear black. He likes to wear white. And oops, I'm just reading now...Smeark is a woman skeleton. The deathly woman in white.


Scandinavian Death
Name: Hel (which means "being")
Living In: Hel
"Hi! What is your name?"
"Hel" (female voice cuz Hel is a woman)
"Oh, where do you live?"
"Hel"
Convienient or confusing? Idk.

Get this, she has a brother called Fenrir. Wasn't that the same name in LOTR or Harry Potter or something? 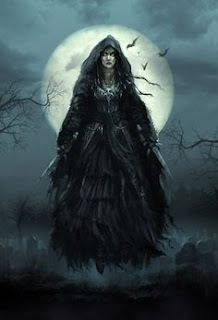 This is what someone (not me) thought Hel looked like. Is she...floating????


Baltic Death
Giltinė
His name looks a lot like guillotine, you know, the thing that comes down BAM!! and chops off your head?
"Giltinė was viewed as an old, ugly woman with a long blue nose and a deadly poisonous tongue. The legend tells that Giltinė was young, pretty and communicative until she was trapped in a coffin for seven years."
Giltinė had a rough life! Trapped in a frickin coffin for seven whole years! Maybe that's where the "seven years bad luck" idea came from! Poor Giltinė. That would make anyone super crotchity.

Indian Death
King Yama (tidbit: pronounciation might be slightly different but "yama" means "mountain" in Japanese)
Indian gods usually had these things called vehicles (I know this from a class I took two, three years ago on Hinduism and Buddhism). Each god has a different vehicle and don't imagine a car, they didn't have those yet. Nope, these vehicles were animals. The gods must not weigh so much because I remember one god's vehicle being a swan or some other kind of beautiful white bird. 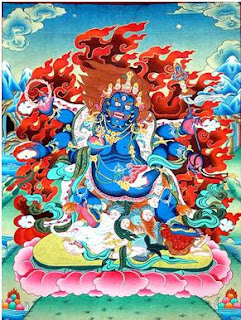 There's no buffalo here but if Wiki says he does, then he most certainly does.

East Asia: Japan
I'm saying specifically Japan because I know of King Enma. Great King Enma who likes to cut off people's tongues in the underworld and doesn't mind his house on constant fire. 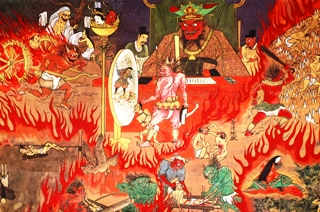 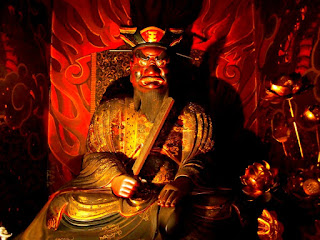 Latin American Death
We all know in Latin America, and probably all Latin Americans know, that Death is celebrated. Not the sense that it is good or anything but they have a big festival called the Day of the Dead.

The orixá Omolu:
Brazilian Death. Can also be the personification of cures. Good. We have a slightly good Death here.

Exu:
Another Brazilian Death. Lord of "the crossroads, who rules the midnight and the cemeteries."

Lady of the Dead:
"Mictecacihuatl is Queen of Mictlan, the underworld, ruling over the afterlife with Mictlantecuhtli, another deity who is designated as her husband. Her role is to keep watch over the bones of the dead. She presided over the ancient festivals of the dead, which evolved from Aztec traditions into the modern Day of the Dead after synthesis with Spanish cultural traditions." 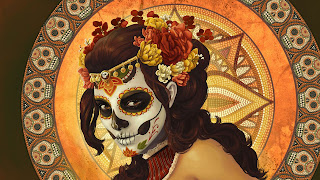 Now, the Angel of Death, we all know so well as the Grim Reaper, comes from Abraham...ic? death stuffs.

There's so much on this :0
I'm not going through it all. Why don't you guys do the reading for a change?

Read it. I DARE you. Okay, this is a dare. You are not allowed to back down from a dare :P

Anything above that is quoted or any really detailed info is from Wikipedia: Death (personification)

Finally, Death the Celebrity.
For some reason, Death is very popular...mostly in the male form. Such as this guy: 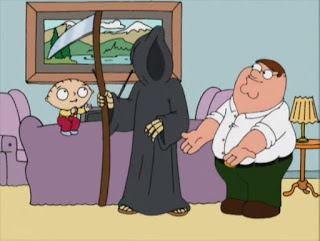 I must confess, I haven't watched neither of these cartoons. Never was interested.

The Part Where I Come Up With The Ultimate Answer
So we have seen, so far, Death depicted as some being, or creature that moves, possibly talks, and possibly one we can touch, like he has substance.

If we wanted, we probably could kill Death. But then, who would take Death to the river Styx? If we kill Death...ooooooh :0 Maybe we become Death as a punishment!!

And the only way we can die is for someone to have the nerve to kill us!

But because no one has ever had the nerve to kill Death, and because it is hard to meet Death when you are still alive, Death can NEVER die!!

But, but, but, butttttt if someone, say, some brave and slightly stupid person decided they wanted to try to kill Death, how would they do it?

Death doesn't have a heart, right? He wouldn't bleed either. Maybe he would die if you...made him drink some Holy water? But Death isn't always evil...how could he die...hmm

I have no answers this time...WAIT.


Could it be that love is how you kill Death?

How it would work and how you would do it, I have NO idea but maybe something that Death doesn't have is what would kill him...hmm...

I'm gonna leave this here for you guys to think about.